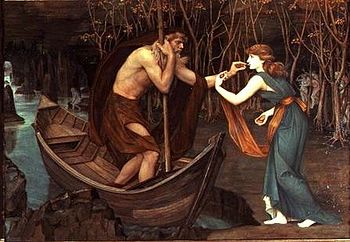 A river that forms the boundary between Earth and the Underworld.

In Greek mythology, the River Styx plays an important role in the geography of the underworld. When souls enter the territory of Hades, they must pay Charon, the ferryman, a fee to cross the Styx. It is the boundary that separates the world of the living from the world of the dead.

The rivers Acheron, Cocytus, Lethe, Phlegethon, and Styx all converge at the center of the underworld on a great marsh, which sometimes is also called the Styx. According to Herodotus, the river Styx originates near Pheneus. Styx is also a goddess with prehistoric roots in Greek mythology as a daughter of Tethys, after whom the river is named and because of whom it had miraculous powers.

If anyone bathes in the Styx and survives, that person will bear the Curse of Achilles and become invulnerable to most physical attacks, excluding a small spot on their body that if struck will instantly kill them.

Ferryman River Styx, Charon is an iconic figure of Greek mythology, for the minor god, or daemon was the ferryman of the dead in the Underworld and is often depicted on his skiff transporting the souls of the deceased. Nyx and Erebus had many children, and so Charon was a sibling to many of the “dark” figures of Greek mythology, including the goddesses Nemesis (Vengeance) and Eris (Strife) and the gods Thanatos (Death) and Geras (Old Age).

Charon was the child of two early deities of the Greek pantheon, Nyx (Night) and Erebus (Darkness).

As with most of the children of Nyx and Erebus, Charon was said to reside within the Greek Underworld, and his role for eternity was to act as ferryman of the dead.

The idea was that Hermes, or another Psychopomp, would escort the newly deceased to the banks of the River Acheron, the River of Pain. Here the skiff of Charon would await, with Charon taking the deceased across the river, as long as they could pay the fare.

Charon’s fee was said to be coinage, either an obolos or Persian denace. Neither coin was particularly valuable, but for the deceased to have in their possession such a coin, meaning that the deceased had been subjected to the proper funeral rites; for the obolos would have been placed in the mouth of the newly deceased.

Those that could not pay Charon’s fee would wander along the banks of the Acheron for 100 years, with their spirits found as ghosts upon the earth, perhaps haunting those who had not undertaken the expected funeral rites.

Those that could pay the ferryman of the dead, would be safely transported across the Acheron into the heart of Hades ’realm. The deceased could then stand in front of the Judges of the Dead, who would pass judgment on how they would spend eternity.

It is often said that Charon was the ferryman across the River Styx, although this was a later alteration of the Charon myth, for, of course, the Styx was the most famous of the rivers found in the Greek underworld. 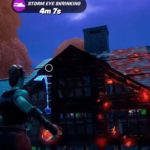 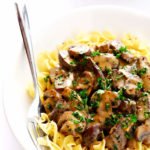